Well, it’s been a while since I blogged but I have been busy, both with music (see news on my site) and healing my injured shoulder, which is taking irritatingly longer than it should. But, as usual, the restrictions have lead to some interesting decisions… but more of that another time.

This is about releasing Song of the Week 2. I have been asked why specific songs weren’t on Song of the Week and, also, some of the songs that didn’t make the first CD have appeared on various TV shows and… well, I wrote a LOT of songs that year and I still really like some of them ( and some, I would glad never to hear again!)

So I am going to take down EPs Happy, When We Were Young and All The Letters from iTunes as some of those songs are on the first Song of the Week. I am also going to take down the singles. These are all songs of the week. Perfect Girl will stay as that was written and recorded before I started the madness.

I will take some of the songs from the EPs and singles and add to them a bunch of songs that I think warrant being released and make them into Song of the Week 2. And after that Song of the Week will be done. I will be taking down the original project from my website as it is time to move on.

The artwork took a while to figure out until it hit me yesterday that I should be using the photo I took of all my song sheets as I had written them. It just so happens that the song sheet sitting on top is one of the previously unreleased songs from this album. The picture sums up my brain! 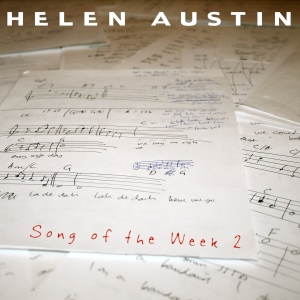 So there you have it… I will be releasing Song of the Week 2 in June. I haven’t decided yet about getting physical copies done. Although I know there are die-hard CD purchasers (and I appreciate each one of you) it seems to be getting less and less relevant. Please tell me if you feel differently.